“I was born to be a superhero, and I will do my own stunts.

I’m working out daily to be this superhero.

Look up Monica Rambeau. She’s me.”

Actor Shanola Hampton is best known as the face of Veronica Fisher on the comedy drama series Shameless (2011-). The series, which revolves around a dysfunctional, low-income family in the Chicago slums, features William H. Macy as the alcoholic father and has seen Emmy nominations for each season. Hampton as Veronica delivers a sharp, engaging performance in what is easily defined as her breakout role. She reminisces about changing on the golf cart for auditions and shares how she is instilling a work ethic for her children, her ideal film role and her perspective on the balance of current events. 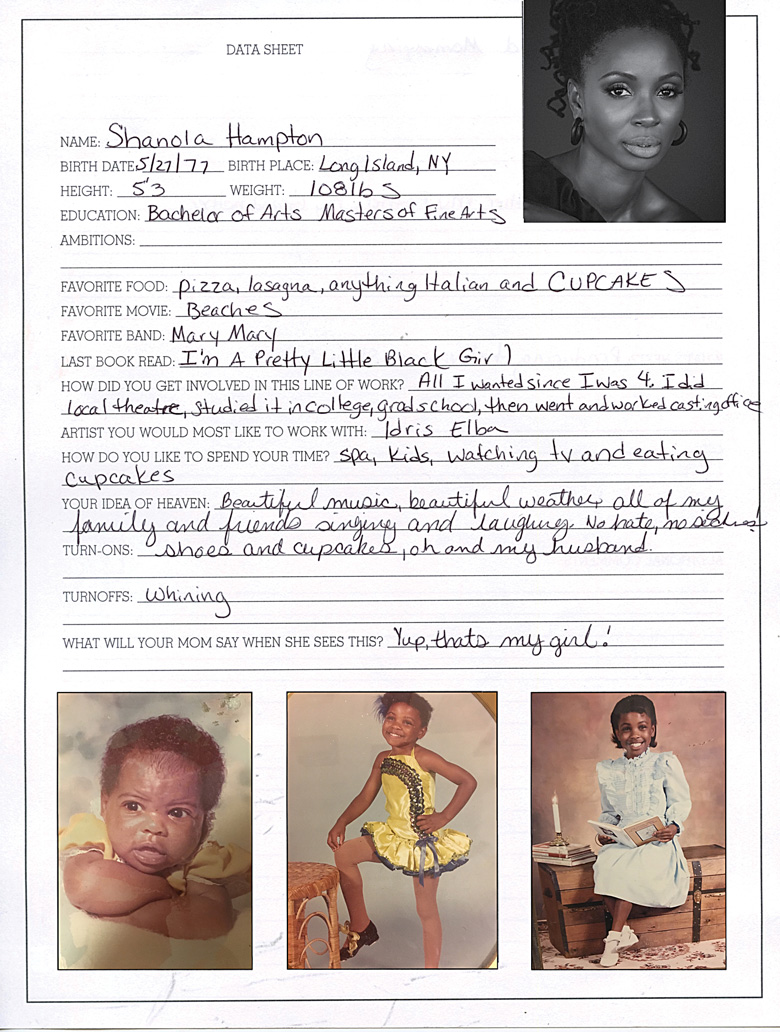 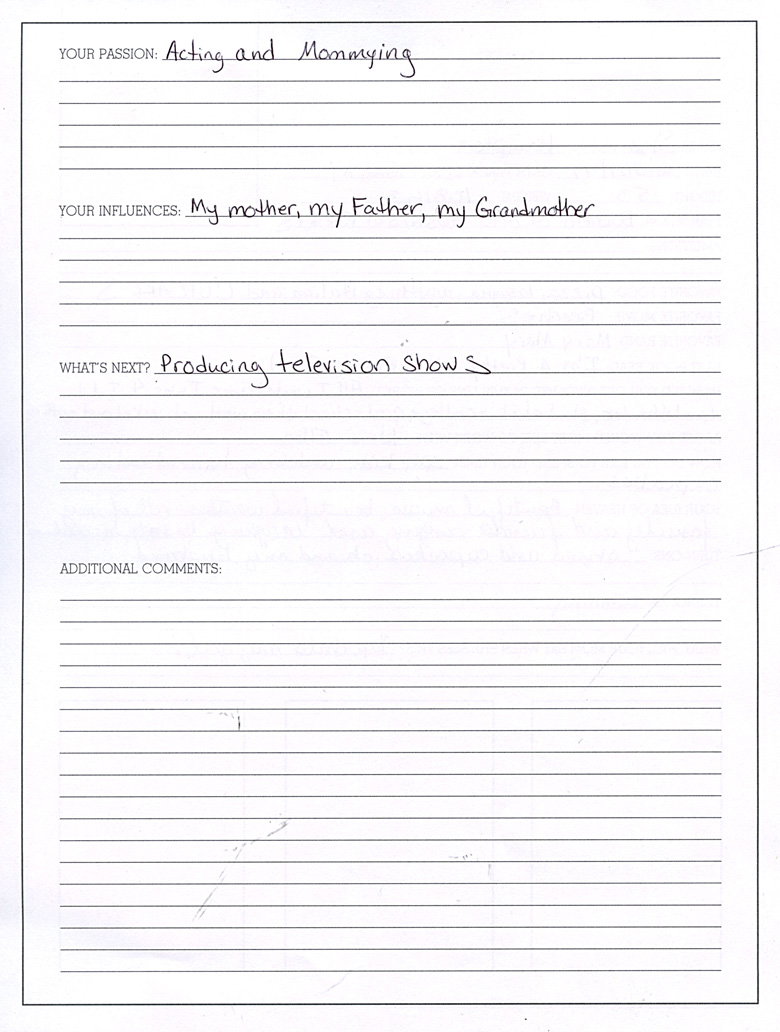 Birthplace:
I’m from small town called Summerville, South Carolina. I was born in Long Island, but I was only there until four so I consider myself a Southern girl.

Turn-ons:
Shoes and cupcakes. Oh, and my husband.

Artist you would most like to work with:
Idris Elba.

Popular
Popular (1999-2001) is an American teenage comedy drama created by Ryan Murphy and Gina Matthews for the WB network and starring Leslie Bibb and Carly Pope. The series revolves around two teenage girls, one popular and one unpopular, who attend the same high school and are forced get along after their single parents wed.

What was your first break?
My first big break was Shameless. Before that, I was right out of grad school, and Ryan Murphy gave me a job on a show called Popular. I worked at a casting office. I guess that was my first break because I got my SAG card and got to be on the shows.

Criminal Minds
Criminal Minds (2005-) is an American police procedural crime drama series and the original show in the Criminal Minds franchise, which includes several spin-offs. The show’s ensemble cast has changed throughout its seasons, with actors Matthew Gray Gubler, A. J. Cook, Kirsten Vangness and Shemar Moore remaining as its only consistent characters.

Miami Medical
Miami Medical (2010) is a CBS medical drama series following the professional and private lives of a team of trauma surgeons. The show finished airing its first season before it was cancelled.

What have you been in?
I’ve been doing Shameless for eight seasons, and I was having kids during that time. I was on Criminal Minds and got to play Shemar Moore’s cousin, which was really fun.

Right before I did Shameless, I had a recurring role as a nurse on Miami Medical, which was shooting on the same lot as the casting for Shameless. I would change on the golf cart and switch out my nurse’s outfit to audition for Shameless. I did that seven times.

How did you decide to become an actor?
It’s what I’ve always wanted to since I was four years old, so it was kind of decided. I think some people are just born to do certain things. God puts a desire in your heart, and that’s what your purpose is. I’m living my purpose.

“Being a parent plays to all of my strengths: I’m a control freak, and I like things to be organized. I can tell them what to do, make a schedule for them and try, God willing, to create good, responsible, loving human beings.”
— Shanola Hampton

How would you describe your specialty or type?
I think my specialty is being quick. I have quick comebacks and quick responses. I’m also very, very expressive. I can give good face or bad face.

Who is your favorite actor you look up to?
Reese Witherspoon is one of my favorites. I love her very much. At the moment, Viola Davis is probably who I look up to the most.

What would your ideal job be?
Right now, I’m acting on a great show with great writing and playing a great character, but my ideal job is to be Monica Rambeau. I was born to be a superhero, and I will do my own stunts. I’m working out daily to be this superhero. Look up Monica Rambeau. She’s me.

Do you consider yourself to be lucky?
I don’t believe in luck. I consider myself super-duper blessed with my family, my job and my friends.

What advantages do you have?
Well, I get free clothes. I get to go places, and I get to take my kids places, you know, as a VIP. My publicist is great at making those calls.

Would you rather have a car or diploma?
A diploma, for sure. I have my Master’s Degree, so I went pretty much all the way. My father wanted me to get my doctorates, and I was like, ‘Let’s stop it at MFA, shall we?’ That’s enough school. All of my sisters had their doctorates. You’re fine, dad.

I have a Masters of Fine Arts and Acting from the University of Illinois, which wasn’t a great time at graduate school. But I had a great time in undergrad at Winthrop University. Very nurturing environment.

“When there’s a big crash, it becomes the foundation for a huge build up. Right now we’re at a big crash, but in the future we’re going to have some major buildings built on a really strong foundation of truth.”
— Shanola Hampton

What do you think about the need for instant gratification?
It’s really ruining this generation. They’re lazy and want things to come very quickly for, and they lack the hustle and desire to start at the bottom and deliver coffee. They want to already be the CEO instead of taking the necessary steps.

I’m trying to keep my kids from falling into that trap. I make them work for it. My daughter is three and a half years old, and she has to earn her dessert for the week. She doesn’t just get a brownie because there’s a brownie there. She has to be rewarded a brownie because she did well in school, because she was nice to her brother, because she cleaned up. You have to work for things. That sounded like I was on my high horse, but I get really aggravated about this instant gratification thing.

How do you feel about how interconnected the world is becoming?
I love social media. It’s good and bad, but the good is that we are interconnected all over the world and we can see things happening that maybe the news won’t show. I’m able to talk to people in Turkey, Ireland and Australia and to connect with fans. It’s an amazing thing.

What does the future look like to you?
For my children’s sake, I hope the future is bright. I think people are going to come together more. We’ve got to get over some humps, though. I believe this about life in general: when there’s a big crash, it becomes the foundation for a huge build up. Right now we’re at a big crash, but in the future we’re going to have some major buildings built on a really strong foundation of truth.

I always tell people that being a parent plays to all of my strengths: I’m a control freak, and I like things to be organized. I can tell them what to do, make a schedule for them and try, God willing, to create good, responsible, loving human beings. I just hope they listen. If you don’t listen to Mom, you’re dumb.

“I think some people are just born to do certain things. God puts a desire in your heart, and that’s what your purpose is. I’m living my purpose.”
— Shanola Hampton

What challenges do you feel the world is facing today?
So many. Just look around at all of the natural disasters we have going on. There is definitely a climate issue, and we are still facing the challenge of -isms: racism and all sorts of -isms. It has come to a light in a way that needed to happen. It’s at the forefront now because of certain events, but it was always there. Now we are able to hit it head-on.

What are you most grateful for?
I’m most grateful for my family and for having an amazing husband and amazing marriage and a really great home life. My house is just easy. It’s easy breezy because I’m living with a great partner and great kids.

What’s your favorite way to communicate?
Text. Please don’t call me. You have to be really special to get on the phone with me. I don’t want to have a conversation. I’m watching TV. Trash, normally: Real Housewives, Love & Hip Hop. It doesn’t matter. Some good TV too, like How to Get Away with Murder.

Texting is the best way to communicate with me. You can email me, but if you want me to answer right away, text me. Did I say not to call me? Please don’t call me.