Gordon Holden
Gordon Holden is an American artist from who lives and works in Hartford, Conn. After graduating University of Vermont without a fine arts degree, Gordon went on to create the product of fine art. His work centers on the future patterns of popular social aesthetics.

Charles Crowell
Originally from Cape Cod, Charles J. Crowell is an artist who resides in Boston. Crowell is a preparator and art handler at the Graduate School of Design at Harvard University and the Institute of Contemporary Art in Boston.

It is a truth universally acknowledged . . . that some of our most interesting conversations happen in the privacy of our iPhones. Gordon Holden, a visual artist in residence at Paul Loya in Los Angeles, made an art piece for Issue. Then Charles Crowell, a fellow artist and friend of Gordon, interviewed him. The following is their text message conversation.

CC: What are you doing?

GH: Sitting on the couch in front of a fan eating stir fry. It’s so hot outside.

CC: A while back, you had written somewhere for some publication that dating (and most other things) are kinda like fast food, and that you can really crave it, but once you have it, you kinda wish you hadn’t. Maybe like stir fry on a hot day.
What have you done in ur time that falls into that category of experience?

GH: Ya I wrote that for an ongoing photo column. There’s just a lot of things out there that r bright and shiny and have this allure to them, but don’t really reflect what they actually r.
I mean I’m trying my best to stay away from those things that provoke that sort of experience, but they r kind of inevitable. If it’s not one thing it’s another. I think it’s just an ongoing thing in life that u just need to keep figuring out. Too many people think they know the answer and have it figured out, that’s could probably be one of the reasons there is so much trolling on the Internet.
I’m into the texting interview. It’s a cool process for a Q&A cause look 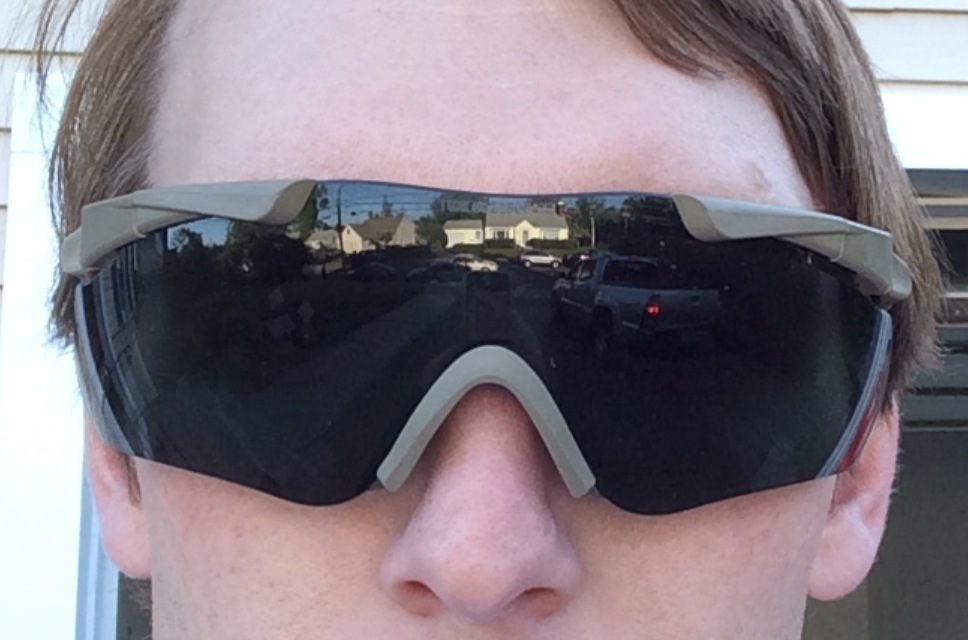 CC: Are those virtual reality glasses or dog the bounty hunter glasses?

GH: They r shooting glasses from one of my friends. he’s an international salesman for a gun manufacturer. So ya dog the bounty hunter glasses.

GH: I know right? It kinda is crazy cause his territory is Africa and the Middle East.

GH: I think that whole idea can be bundled into the category of curiosity. People r curious creatures, if there’s something that everyone is giving attention to and talking about, do U not want to be apart of the conversation? This is obviously a conscious choice. A majority of people r very afraid of being left out of the conversation. Hence pop culture. So really the jumping off point for me is pop culture. It somehow engages people a little but more than abstraction.
Maybe I’m an under cover attention whore

“A majority of people r very afraid of
being left out of the conversation.
Hence pop culture.”
— Gordon Holden

CC: Haha, that might explain the gunman glasses as a fashion statement.
So not smoking cigarettes is a conscious choice for you. To abstain from that popular activity.
What else do you abstain from?

GH: Ha I dunno, that kind brings it down to morality and that’s a weird subject. I also abstain from doing heroin but that doesn’t mean it isn’t right for someone else.

GH: Lol, I’m not sure. K-pop isn’t something I’m too familiar with. I’ve heard of it, but i haven’t eve really looked into it. As for the plastic surgery, it seems that they really idolize the western world to the point where they want to mimic it to an extreme extent. then again in the USA we like to mimic celebrities. Have u seen those 2 people that had tons of plastic surgery to look like a Barbie and ken doll? That’s pretty extreme. It all comes down to attention.
Or maybe some kind of internal struggle for some form of success.

CC: I think the Barbie girl is Eastern European. Whatever, it’s all body mod to me.
Harping on the fetishization of celebrity, what do you think is the difference between fame and success in America?

GH: I think people see success as being rich and famous and having ur house on the mtv show cribs, but being a celebrity is completely blurred in most of the populations eyes. Celebrity is also a very quick thing now with the Internet. Quick to happen but also quick to end.
It’s all really just entertainment content in the end.

CC: Tell me more about the internet. What do you think is the highlight and the lowlight of the internet?

GH: The highlight is that information is at ur fingertips. And the lowlight is that it is taking over our brain and in a way we are starting to know less and less. Kind of like going on auto pilot. Our brains have a large capacity to retain information. It almost seems the change is shifting in the form of knowledge of knowing answers to knowing keywords. It could be good, it could be bad, I’m not too sure yet.

“It almost seems the change is shifting
in the form of knowledge of knowing answers
to knowing keywords.”
— Gordon Holden

CC: Yeah. There is a critical difference between a simple and sincere synthesis of information and the reduction of ideas into a hashtag.

CC: Mixing business with pleasure is a tough thing.
Sometimes I’d say it’s the only thing worth working for, other times I’d say you’re right.
What wo

GH: Half of the message got cut off all I got was 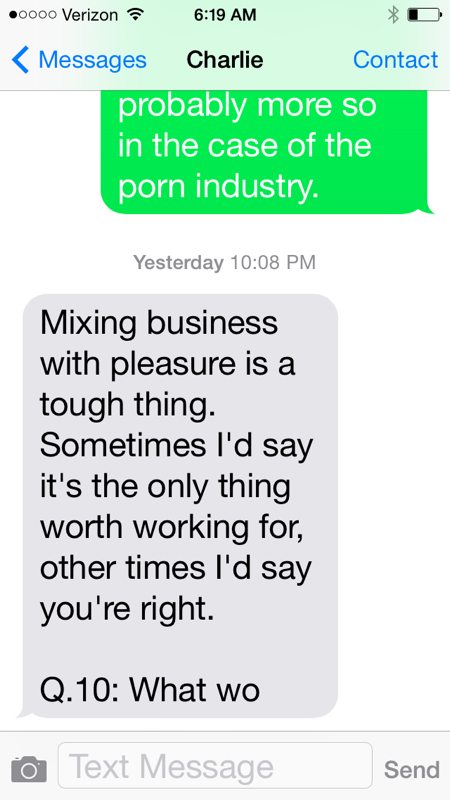 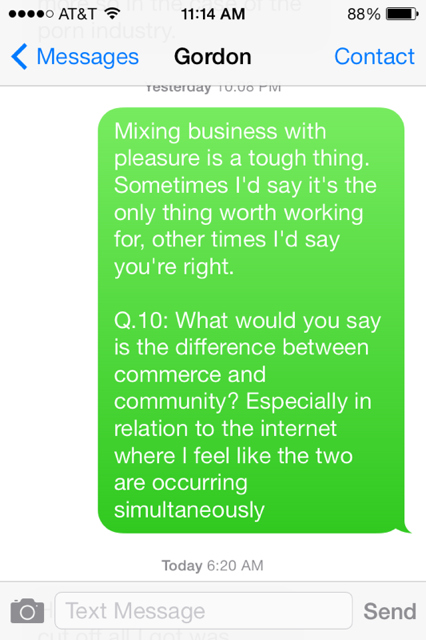 CC: This format is becoming so meta…

GH: The most obvious is they’re spelled differently. That’s about all i can think of right now. I drank way too much coffee this morning.

CC:Fair enough.
Let’s switch it up then. Rapid fire.

CC: What do you think of graveyards?

GH: Spooky but cool, if u believe in ghosts

GH: Well u should get some sleep, but I can definitely tell u if u can’t sleep or don’t have time to sleep and have to be awake, Don’t drink tons of coffee if u don’t usually drink coffee. It ruins u.

CC: It gives ya the runs!
How do I get a girl to like me?

GH: Ooo that’s a tricky one. Lots of dudes use cologne, I don’t know if that really works. I’ve also heard if u act like u don’t want them to like u, they end up liking u. Kinda comes down to playing some kind of game. It’s like when aol instant messenger was around, the game was played with the use of the away message.
..I’m really craving a hot lobster roll right now. 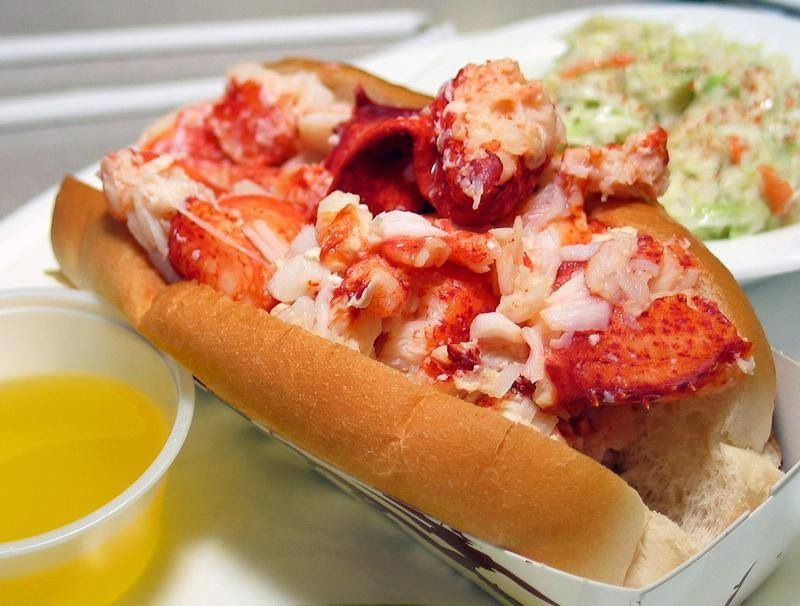 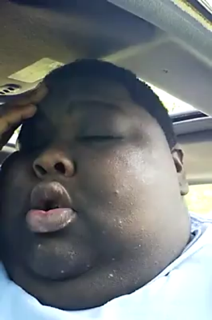 CC: Right now I’m really conflicted about the role of the artist. I just saw the Jeff Koons retrospective at the Whitney. Good shit. I enjoyed it. But‚Ä¶

GH: Ya there’s always a but…

CC: Maybe I care too much.

GH: I mean his stuff is great. Some better than others. It just seems that people like the underdog, and when he was the underdog he made waves. Then it seems like something else took over, instead of making something of an interesting nature and of his own, his creations became predictable, understood by everyone and big and shiny. But that’s probably driven by something outside of the artist themselves. I mean he has a mega yacht. Same thing as trying to get a girl, u have to have the desire to want a yacht.

CC: You ever had a gushers blunt?

GH: I love gushers, but I’ve never had it in a blunt. That sounds interesting.

CC: Enough about stoner snacks.
Last time I talked to you, you had mentioned making a digital art show. Using “the cloud” as gallery. how is that coming along?

GH: Ya it’s still an idea in the works, just kind of on the back burner for now. Hopefully I will be able to get it rolling by late fall.

CC: Well I’d love to see it progress. I love the democracy of it. Especially if it were to be hacked. Haha
What’s been occupying your time lately? Any new shows or upcoming projects?

GH: I’ve been working on a couple projects that have been keeping me busy. A group show in LA at Paul Loya Gallery that goes thru august 23. A solo show in NYC at Lyons Wier gallery apart of a summer series that will open around mid August, and A piece for the world wildlife fund auction that will take place in September. Along with some cool collaboration I am doing with street wear fashion retailer Karmaloop. And a yoga studio that I have recently opened up with my partner a couple months ago.

CC: Damn, you got more than just a lobster roll on your plate right now lol.
I can’t wait for the solo show at Lyons Weir. I will definitely be there.
So you’ve dabbled in phot

GH: Ur question got cut off again 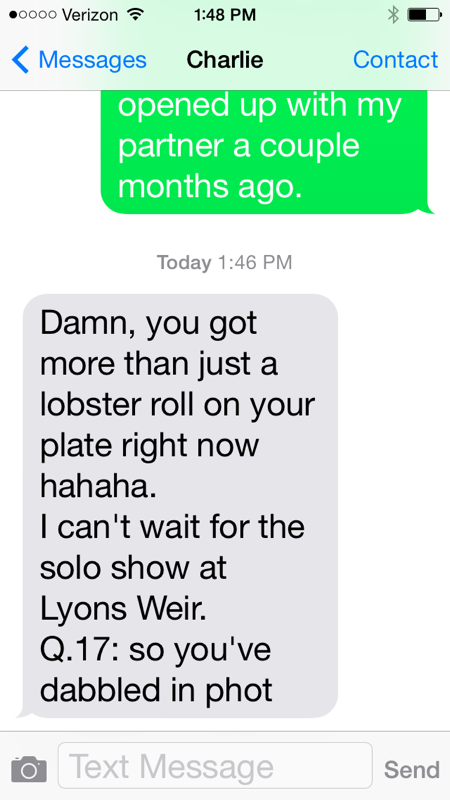 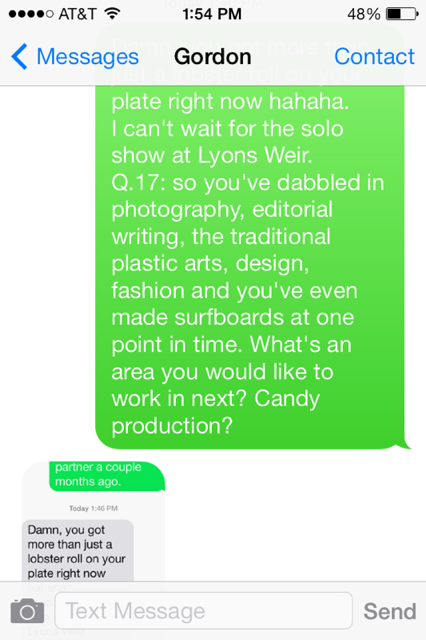 GH: Ya candy production would be cool. Oscar Murillo just did something with candy. Since candy is for children, I was contemplating making my own brand of liquor? Cause alcohol is just candy for people over a certain age. I’m not sure. Or maybe a combination like a Yoohoo infused liquor drink. So in that case it would be for both people who wanna grow up and people that don’t.
Actually I remember I had an idea a couple weeks ago when I was walking my dog. And was thinking -damn my dog hates chasing things but loves food. So I had the idea to create a frisbee that smells like bacon. It’d probably be best as one of those as seen on tv products.

CC: That’s a million dollar idea if I ever heard one.
Where does that idea stem from? Is that an entrepreneurial venture or an artwork?

GH: I think they’re one in the same really. The main difference is entrepreneurs are trying to make something practical to make our lives more convenient than they already are. To make art in today’s world is to question that convenience.

“Entrepreneurs are trying to make something
practical to make our lives more convenient
than they already are.
To make art in today’s world
is to question that convenience.”
— Gordon Holden

CC: Well put.
Within your practice, be it entrepreneurial or artistic, where do you derive most of your enjoyment from? Basically, why do you do what you do?

GH: That’s a good question and I ask myself it frequently. And the answer is forever changing. The most basic explanation is that by doing what I do for fills a need. Everyone needs to do stuff and everyone does what they do for different reasons.
But for me I think progression has a little bit to do with it too.

CC: Ok. Last question. Sorta..
What do you think about the singularity theory? That one day technology will progress so rapidly, that humanity will be taken over by artificial intelligence.

GH: It’s hard to say. But there might be some validity to it and the movies that predict it like the terminator.
I guess we’ll have to wait and see.

GH: Forever waiting. No, I think that’s about it. Thanks Charlie.