“I started writing in college because I wanted to dictate the stories
that I was telling. Then, shortly after writing something
for myself to act in, I realized I wanted even more control and
then I started directing. Directing is my favorite.”
— Hannah Pearl Utt

Hannah Pearl Utt
Hannah Pearl Utt (born February 1997) is an actress, writer and director from Santa Barbara, California. She is best known for directing and starring in the series Disengaged, which she created and wrote with Jen Tullock. Utt and Tullock’s short film Partners premiered at the 2016 Sundance Film Festival. In 2017, Utt was selected for the inaugural Sundance Catalyst Women initiative and the 2017 Sundance Directors and Screenwriters Lab. She received a 2018 Adrienne Shelly Foundation Women Filmmakers Grant for Before You Know It, her feature directorial debut.

Before You Know It
Before You Know It is a 2019 American comedy film directed by Hannah Pearl Utt, and written by Utt and Jen Tullock. The film was a Grand Jury Selection for the 2019 Sundance Film Festival and was released in the US on 30 August 2019.

California native Hannah Pearl Utt co-wrote, directed and stars in Before You Know It, a dark comedy about stage manager Rachel Gurner (Utt) and her off-kilter, theatre-loving family. The film, which also features Alec Baldwin and Judith Light, is a huge step forward for Utt, who began her acting career in commercials before turning to writing and eventually directing. She talks with us about childhood musicals, the drive to tell her own stories, and finding little bits of L.A. all over the world. 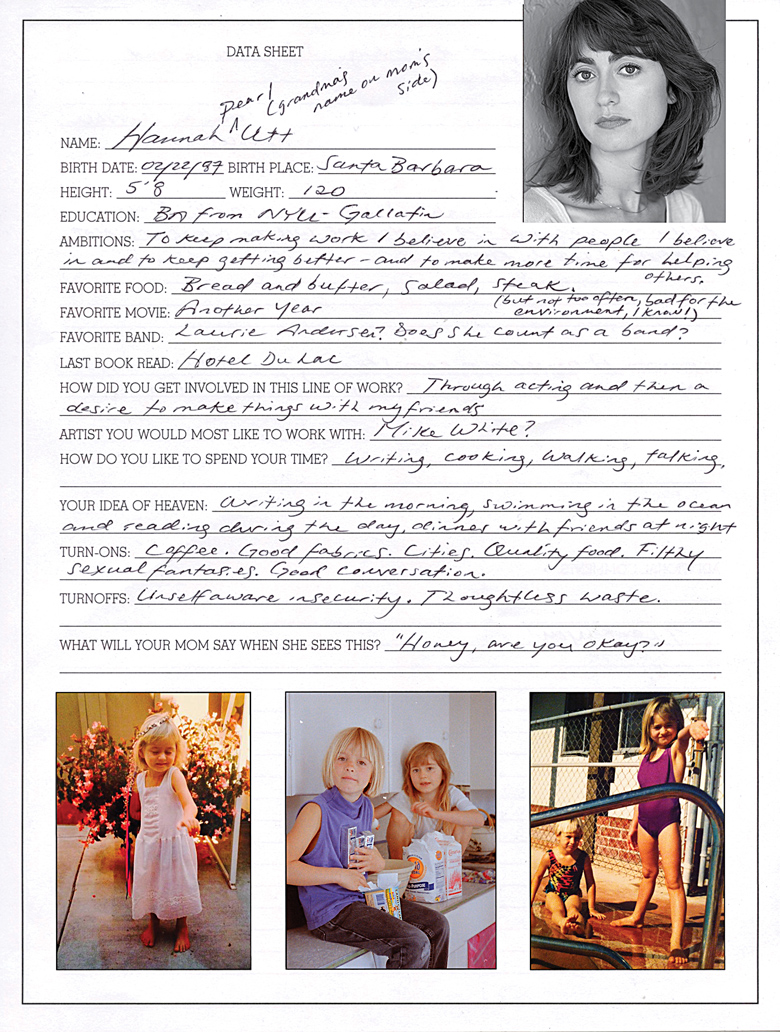 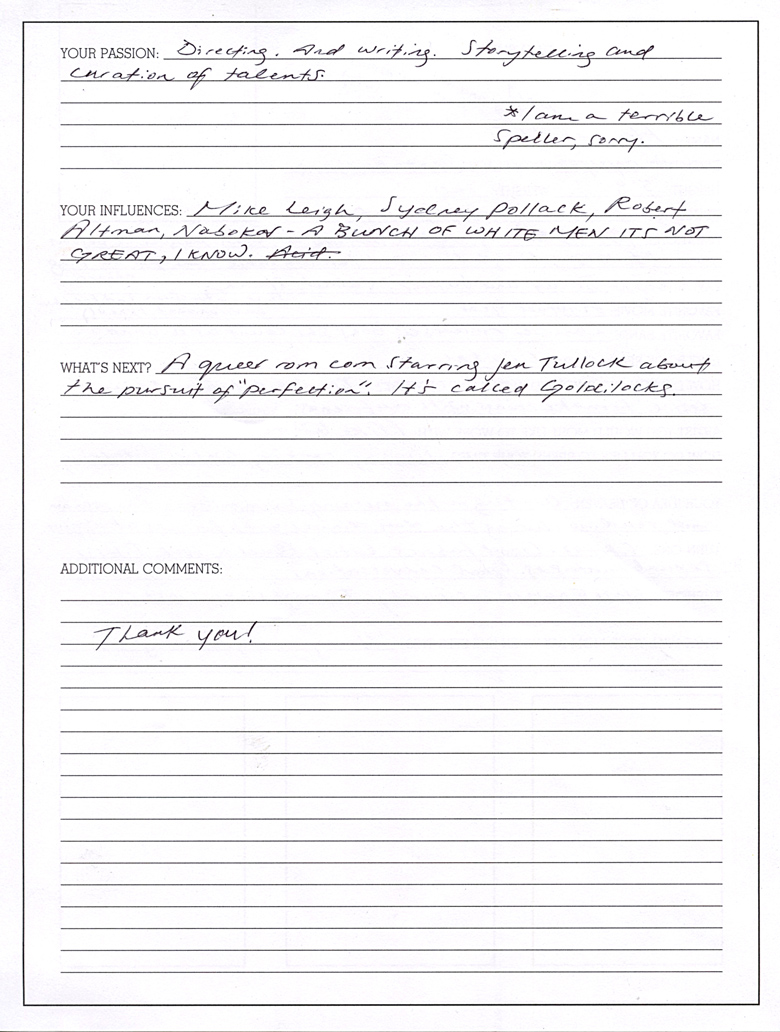 Where are you from?
I’m from Santa Barbara California.

Favorite food:
Bread and butter, salad, steak. (But not too often, bad for the environment, I know!)

Your idea of heaven:
Writing in the morning, swimming in the ocean and reading during the day, dinner with friends at night

How do you like to spend your time?
Writing, cooking, walking, talking.

What felt like your first break?
Probably the first commercial I ever booked, because that was the first time I could envision a life where I was not working in restaurants.

What have you been in?
A lot of commercials. A lot of my own work. I played a small part in Ingrid Goes West which came out a couple years ago and my own movie Before You Know It.

How do you feel about this career?
The career part is just the thing I have to do, but the making things I feel so lucky to get to do. I love it so much.

“I started writing in college because I wanted to dictate the stories that I was telling. Then, shortly after writing something for myself to act in, I realized I wanted even more control and then I started directing. Directing is my favorite.”
– Hannah Pearl Utt

So how did you decide to become an actor and make your own films?
I started acting when I was eight. I did a really great production of ‘It’s Greek to Me’ with the Show Stoppers. It was a musical where we took the songs from Hair but changed the lyrics so that it was about Greek mythology, so it was educational as well.

Pretty much from that point on, I was sold on acting and then I started writing in college because I wanted to dictate the stories that I was telling. Then, shortly after writing something for myself to act in, I realized I wanted even more control and then I started directing. Directing is my favorite.

How would you describe your specialty or type?
My specialty character-driven, dark comedy and comedic drama.

What would your ideal job be?
My ideal job would be directing my own movies for the rest of my life.

Do you consider yourself to be lucky?
Yes.

What advantages do you have?
I have a really great community of friends. I have a supportive family who I’ve managed to maintain good relationships with from California. It feels like an advantage. Is that a weird thing to say? I don’t know.

I grew up around creative people and I mean, there are so many advantages that I am becoming aware of and learning to feel grateful for.

Would you rather have a car or diploma?
A car.

How do you feel about how interconnected the world is becoming?
I think it’s exciting and I think it’s scary. I recently went on a trip to Europe it started with film festivals and then we branched off and visited a couple other countries.
On the one hand, it was comforting because I could find all the things that bring me comfort in L.A. On the other hand, I was like, oh, Hipster is just the same everywhere. You can get the same pink ceramic mug to have your oat latte in in Porto that you can in L.A. or in New York. The cities are all starting to look an awful lot alike. So I find that kind of creepy but I’m also like, “I’m drinking my oat latte!”

“On good days the future looks a lot like what my life looks like now with a little more financial security. On bad days it looks like a literal hell where everything’s on fire and I’m fighting to protect people’s children from dying of thirst or famine.”
—Hannah Pearl Utt

What does the future look like to you?
On good days it looks a lot like what my life looks like now with a little more financial security. On bad days it looks like a literal hell where everything’s on fire and I’m fighting to protect people’s children from dying of thirst or famine.

How do you feel about having children?
I feel conflicted about it. I was pretty set on not having them until I met my current partner and I really like the idea of raising children with him. Pregnancy doesn’t really appeal to me. Parenting does.

But I’m really freaked out about the next chapter for humanity and I’m worried that I would have a lot of guilt bringing someone else into that. I think that’s a pretty common sentiment right now for our age and not crazy.

“We have things that bring us comfort that are ruining our planet. The individualism seems to be outweighing our desire to keep the human race alive.”
—Hannah Pearl Utt

What challenges do you feel the world is facing today?
Fear. I think a lack of resources. It’s turning into tribalism that’s turning into hate that’s speeding up the entropy we’re already spiraling into. I would say fear. Global warming, climate change. Climate changes, that’s the thing and we’re in denial about it and we have things that bring us comfort that are ruining our planet. The individualism seems to be outweighing our desire to keep the human race alive.

What is your favorite way to communicate?
Through writing I think and like, talking over a wine. A lot of wine and good food.

The Flamethrowers
The Flamethrowers is a 2013 novel by American author Rachel Kushner, that follows a female artist in the 1970s. The book was released on April 2, 2013 through Scribner. While writing the book, Kushner drew on personal experiences during and after college, as well as her interests in “motorcycles, art, revolution and radical politics.” The book was selected as one of the “10 Best Books of 2013” by the editors of the New York Times Book Review.

What’s your favorite book film and music right now?
Favorite book right now. I really loved The Flamethrowers, I just read that. I enjoyed it quite a bit. I think it’s perfect but I had a really good time reading it.

My favorite movie right now. I think Phantom Thread left the strongest most lasting impression of the movies I have seen in the last couple years. But I also just rewatched A League of Their Own and that movie, wow. What a tear-jerker.

My favorite music right now. I mean, it pretty much just listen to KCRW. I listen to ‘Morning Becomes Eclectic’. I don’t do a very good job of keeping track of the actual songs or artists that I’m loving, I’ll ‘Shazam’ them and then they just get piled up in the list. Yeah. Not doing great with music.