“I never thought I’d be here.
Never thought Give Me Liberty would take me this far and I’m
all excited and a little nervous at the same time.”
— Chris Galust

Chris Galust
Chris Galust worked as an electrician in Brighton Beach before being cast in his first acting role. His films include Give Me Liberty and the remake of Castle Freak.

GIVE ME LIBERTY
Making the official selection at Sundance Film Festival 2019 and Cannes Film Festival 2019, Give Me Liberty follows a group of medical transport clients and Russian funeral-goers unexpectedly flung together in one hectic, off-the-rails and ultimately life-affirming ride. The film stars Lauren ‘Lolo’ Spencer in a breakout performance as Tracy, a vibrant young woman with ALS.

KIRILL MIKHANOVSKY
Give me Liberty director Kirill Mikhanovsky immigrated from Russia to Milwaukee, where he studied Linguistics and Anthropology at UWM. He had a series of odd jobs while in college, including driving medical transport for people with disabilities. His first feature, the Brazilian Sonhos De Peixe (Fish Dreams) premiered at the Cannes Film Festival (Critics’ Week) and received the Prix Regard Jeune. Give Me Liberty is his second feature.

CASTLE FREAK (Remake)
Castle Freak, a 1995 horror film directed by Stuart Gordon, is getting a remake. Tate Steinsiek is directing the movie from a script by Kathy Charles, while legendary horror composer Fabio Frizzi is handling the music. Dallas Sonnier and Amanda Presmyk are producing for Fangoria. The new Castle Freak will once again focus on a hideous creature lurking within the bowels of a castle.

Discovered by a casting director while buying a cake for his Russian grandfather, former electrician Chris Galust found himself in his first movie role playing—fittingly—the grandson of a Russian immigrant. In Give Me Liberty, Galust is Vic, a medical transport driver taking his grandfather and émigré friends to a funeral, and the film paints a bittersweet portrait of American dreams and disenchantment. The actor talks with us about his big break and the joy of not knowing what’s coming next. 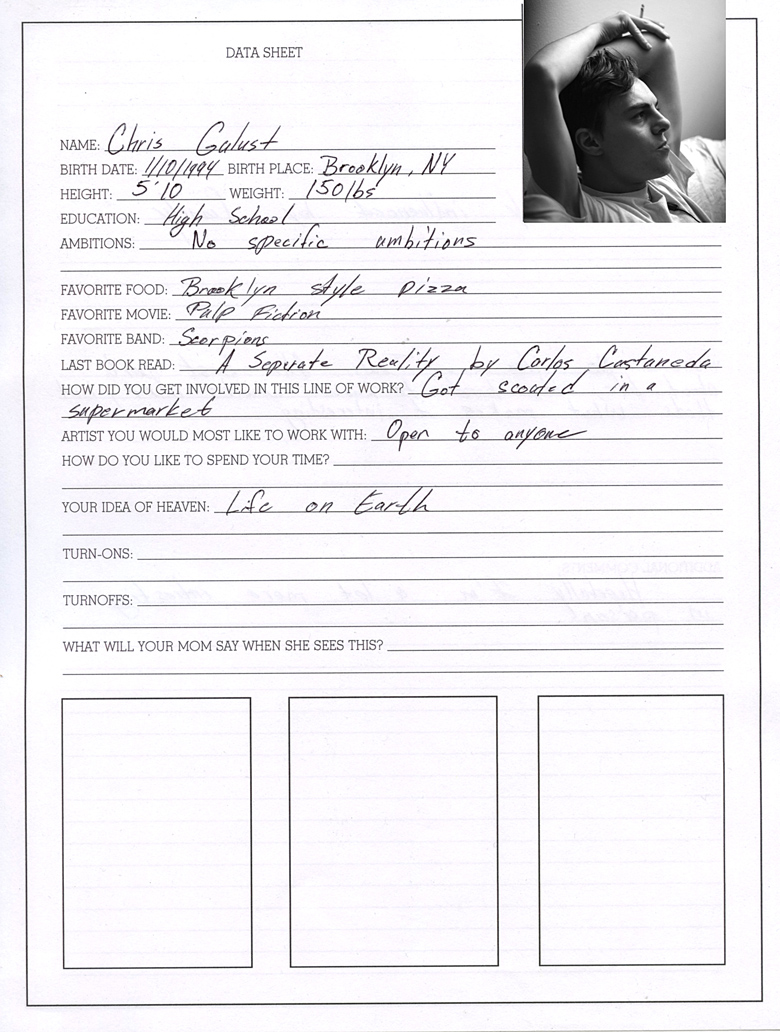 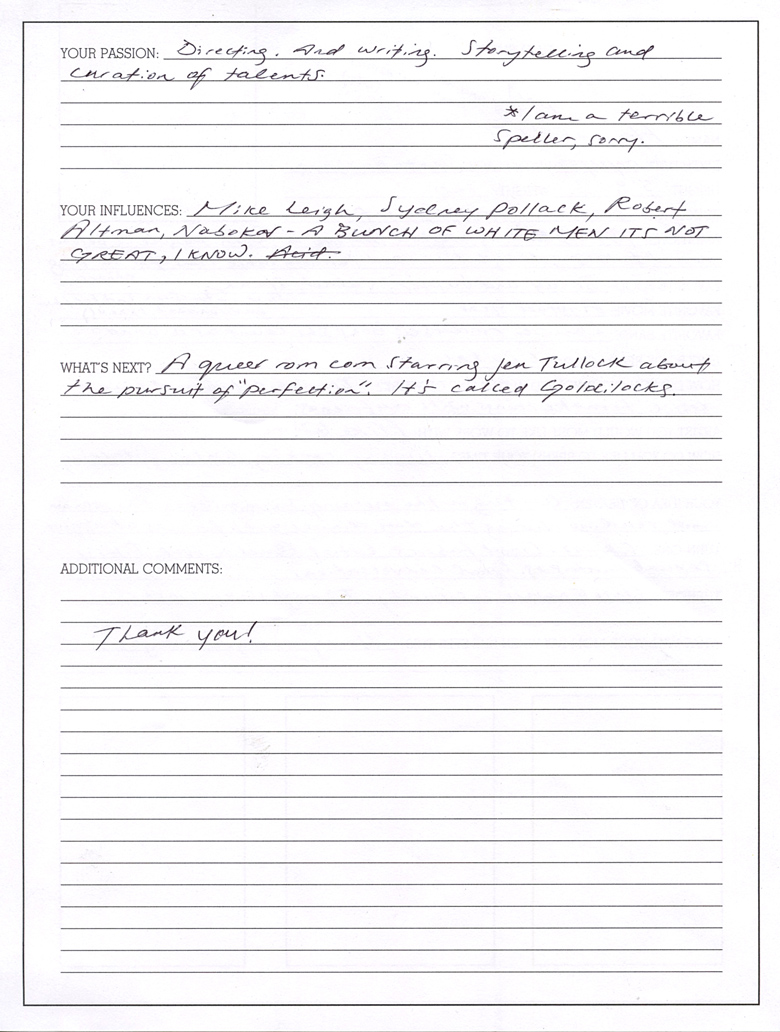 Where are you from?
I’m from Brooklyn, New York.

What was your first break?
Give Me Liberty. It was filmed and directed by Kirill Mikhanovsky, the screenplay was written by Alice Austen, and everything was done in Milwaukee.

What have you been in?
Give Me Liberty and Castle Freak so far.

How do you feel about this career?
I don’t know how to feel yet. I mean it feels good. I never thought I’d be here. Never thought Give Me Liberty would take me this far and I’m all excited and a little nervous at the same time.

“The whole educational system and getting a diploma doesn’t really mean much to me, to be honest.”
—Chris Galust

How did you decide to become an actor?
I didn’t really. I mean I did decide, but it was very impulsive decision. I was scouted and I was offered to do a couple of castings so I did, and Kirill and Alice really liked me. They flew me out to Milwaukee and that’s where it all kicked off.

How would you describe your specialty, your type?
I’m still in the discovery part of that life so I don’t know. Well, in my previous films I’m very good at driving! I know I might have a lot of…more talent that I just haven’t discovered yet.

Who’s your favorite actor you look up to?
I really like the old stuff with Harvey Keitel and Tim Roth. I’m still getting into the whole industry, I’m very new and my opinions are very open about actors and actresses.

What would your ideal job be?
Well, as of right now the way that acting is going, it seems like that’s the perfect fit. But yeah I’ve been doing electrical for most of my life. It’s a pleasant, pleasant change.

Do you consider yourself to be lucky?
Very. Most times I have my bad days too.

Would you rather have a car or a diploma?
A Car. The whole educational system and getting a diploma doesn’t really mean much to me, to be honest.

“The world is changing and in very positive ways, especially as of recently. I’m already a great believer in energy shifts and hopefully it’s going for the positive.”
—Chris Galust

How do you feel about how interconnected the world is becoming?
The world is changing and in very positive ways, especially as of recently. I’m already a great believer in energy shifts and hopefully it’s going for the positive.

What does the future look like to you?
I don’t know. That’s what’s good about it. The future is unpredictable and that’s what makes it exciting.

How do you feel about having children?
I’m definitely not ready for that yet. I still have a long way to go before I can raise a youngling.

What challenges do you feel the world is facing today?
Mainly understanding each other at all. That’s where it all begins. There’s always a huge misunderstanding and a big loss of translation somewhere.

What are you most grateful for?
Having the opportunity to come into this industry, and actually, doing Give Me Liberty was a really amazing experience. Honestly, even Castle Freak was just for experience. Well, I do consider myself lucky—I have a living, I have the ability to meet amazing people that come across my way.

“I like to communicate face to face. I mean, phone calls very rarely, but I like to see the person and feel their energy.”
—Chris Galust

What is your favorite way to communicate?
Face to face. Not text. I mean, phone calls very rarely, but I like to see the person and feel their energy.

What is your favorite book, film and in music right now?
Books, film and music. Let’s start with film because it’s I guess a little easier. I don’t have a particular favorite film. I have a favorite director: Tarantino. It sounds a little cheesy but I love all his work.

Book, I don’t have a favorite. To be honest, recently I haven’t gotten a chance to read so much and music I am open to everything. Anything that has a little kick to it.