Alex Høgh Andersen
Danish actor Alex Høgh Andersen is best known for his role as “Ivar the Boneless” on History Channel’s Vikings (2013-). Andersen has also appeared in the Danish TV show Hedensten High (2015) and the Tobias Lindholm film A War (2015).

A War
A War (2015) is a Danish war drama film written and directed by Tobias Lindholm. Starring Pilou Asbæk and Søren Malling, with a supporting cast including Alex Høgh Andersen, A War tells the story of a Danish military company stationed in Afghanistan whose commander is accused of committing a war crime. The film was nominated for Best Foreign Language Film at the 2016 Academy Awards.

Best known for his role as “Ivar the Boneless” on History Channel’s historical drama series Vikings (2013-), Alex Høgh Andersen began acting in theater productions in Denmark before appearing in small TV roles. In 2015, he appeared in the Danish film A War by director Tobias Lindholm (The Hunt, A Hijacking) before being added to the main cast of Vikings. Andersen discusses the actors who inspire him, his love of photography and the appeal of playing an anti-hero. 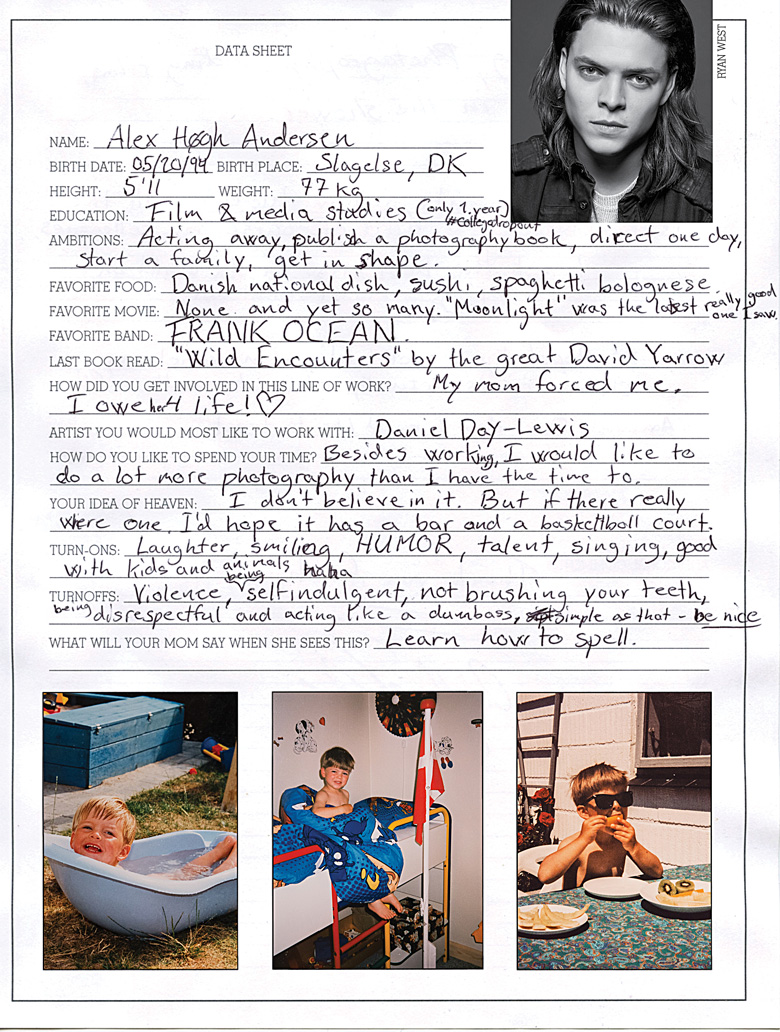 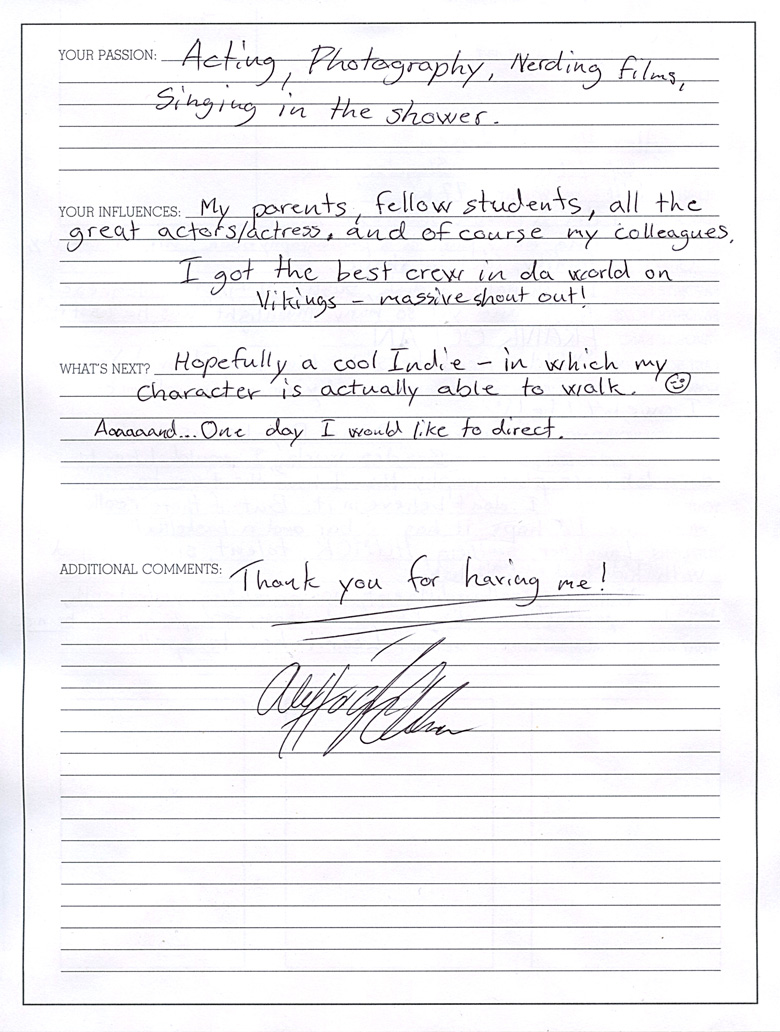 Education:
Film and media studies. Only one year, I was a college dropout.

Your passion:
Acting, photography, nerding films, singing in the shower.

Ambitions:
Acting, publish a photography book, direct one day, start a family, get in shape.

Favorite movie:
None, and yet so many. Moonlight was the last really good one I saw.

Artist you would most like to work with:
Daniel Day-Lewis.

Your idea of heaven:
I don’t believe in it, but if there really were one I’d hope it has a bar and a basketball court.

“My mom signed me up for something because I had too much energy and playing soccer wasn’t enough. I was like, ‘Mom, what are you doing?’ And of course she was right.”
— Alex Høgh Andersen

Turn-offs:
Violence, being self-indulgent, not brushing your teeth, being disrespectful and acting like a dumbass. Simple as that. Be nice.

What have you been in?

A little theater stuff back in Denmark and some small TV stuff. I was in A War, which was Oscar-nominated. I was blown to pieces within the first ten minutes, so let’s not talk about that one.

How do you feel about this career?

I feel good. Right now, it’s the best job in the world. I’m shooting in Ireland, and the Irish are the most friendly, welcoming people in the world. There’s a bit of culture shock, but it’s very nice here.

How did you decide to become an actor?
I didn’t decide. It just happened, or my mom signed me up for something because I had too much energy and playing soccer wasn’t enough. I was like, “Mom, what are you doing?” And of course she was right.

How would you describe your specialty or type?
There’s this thing with Scandinavian people or foreigners in the America. They tend to be the villains. Right now I’m playing a mean motherfucker, and it’s so much more fun than being the hero because you get away with more. The best character in the world is the anti-hero, and I would like to say my character in Vikings is close to that. I try to maintain balance. A one-dimensional character is the most boring thing in the world.

Who’s your favorite actor you look up to?
I can’t pick one. I think what Heath Ledger did with the Joker in The Dark Knight (2008) is one of the best. Tom Hardy’s silence is great. The acting with the eyes. And then I’m a sucker for Meryl Streep, just like everybody else.

What would your ideal job be?
Acting and eventually directing, with a touch of photography.

“It sounds cheesy, but I would love to have a cup of coffee without cell phones… It would be cool to have a National No Phone Day. I think people would like it.”
— Alex Høgh Andersen

Do you consider yourself to be lucky?
That’s a hard yes.

What advantages do you have?
I’m good at understanding people, and that helps me a lot with what I’m doing. Like right now I play a Viking that would have lived over 1,000 years ago. He’s crippled, and to make him relatable it’s all about portraying what he is going through. There’s no difference between him and someone who is crippled in the 21st century. It’s the same thing of being different, not accepted in society and to be someone who struggles. So what actors portray is actually emotions, and I’m good at that. And I’m good at lines as well.

How do you feel about how interconnected the world is becoming?
There are good things and bad things. It’s become very easy to talk to everyone, but we really don’t talk to each other. It sounds cheesy, but I would love to have a cup of coffee without cell phones. It’s also become easy to insult each other behind the screens. It would be cool to have a National No Phone Day. I think people would like it.

What does the future look like to you?
Bright, of course. I hope it’s going to be challenging. A challenging future because every time it’s a challenge, it’s fun. If it was easy I wouldn’t do it.

How do you feel about having children?
I would love to have children. I can imagine myself in the backyard running around with my kids.

What challenges do you feel the world is facing today?
The whole climate crisis that people apparently won’t accept—especially dear Mr. Trump—is just awful. That’s one of a lot of issues… I’m 23, so I can’t stand here and outsmart people about the world’s problems.

What are you most grateful for?
How happy I am.

What is your favorite way to communicate?
Well, I’m communicating when I’m working. And through a lens when I’m shooting, because photography is my biggest hobby, and it’s a way of communicating as well.

What is your favorite book, film, and music right now?
Music: always Frank Ocean. Movie: I love Spike Jones’ Her with Joaquin Phoenix. Book, I don’t know why, but I have a thing for American Psycho by Brett Easton Ellis. I think it’s horrible. Horribly great.