“It’s so funny, my ideal job is the job that I have now,
which is I play a regular character on a cool funny comedy show on a cable network.
That was my mountaintop for a long time.”
— Heléne Yorke

HELÉNE YORKE
Heléne Yorke (born Heléne Ann Dyke, February 1985) is a Canadian actress, singer, and dancer. She is known for her work on Broadway for originating the roles of Olive Neal in Bullets Over Broadway and Evelyn Williams in American Psycho, as well as for playing Glinda in Wicked on tour. Additionally, Yorke is known for her work on television, playing the role of Jane Martin on the Showtime American period drama television series Masters of Sex, Olivia Graves on Graves, and Amy Breslin on The Good Fight. Yorke currently stars in in Comedy Central’s new series The Other Two.

MASTERS OF SEX
Masters of Sex is an American period drama television series that premiered on September 29, 2013, on Showtime. It was developed by Michelle Ashford and loosely based on Thomas Maier’s biography Masters of Sex. Set in the 1950s through the late 1960s, the series tells the story of Masters and Johnson (Dr. William Masters and Virginia Johnson) who are portrayed by Michael Sheen and Lizzy Caplan. It was nominated for a Golden Globe Award for Best Drama Series in 2013. The series was canceled by Showtime on November 30, 2016, after four seasons.

DREW TARVER
Andrew Tarver is an American actor and comedian from the Upright Citizens Brigade Theater in Los Angeles. Tarver is best known for starring in the Seeso (comedy streaming service) show Bajillion Dollar Propertie$. He is a member of the sketch and improv comedy group Big Grande and plays Bill Cravy on their podcast The Teacher’s Lounge. He is also a regular guest on the podcasts Comedy Bang! Bang!, Matt Besser’s podcast improv4humans, and Paul F. Tompkins’ podcast Spontaneanation. In 2017 he played the fictional Carl Hardee Jr. in a series of commercials for Carl’s Jr. and Hardee’s.

Canada-born, LA-raised actor Heléne Yorke grabbed our attention as Jane Martin in Masters of Sex, and is now starring in Comedy Central’s new series The Other Two. Giving Yorke license to be unapologetically hilarious, The Other Two comes from Saturday Night Live head writers Chris Kelly and Sarah Schneider, and stars Drew Tarver as a twenty-eight-year-old actor struggling to get decent auditions and Yorke as his 30-year-old sister, whose lives are completely upended when their thirteen-year-old brother becomes incredibly famous overnight. Yorke chats with us about Glenn Close’s Instagram account, scoring her ideal job and why we need to start listening to each other. 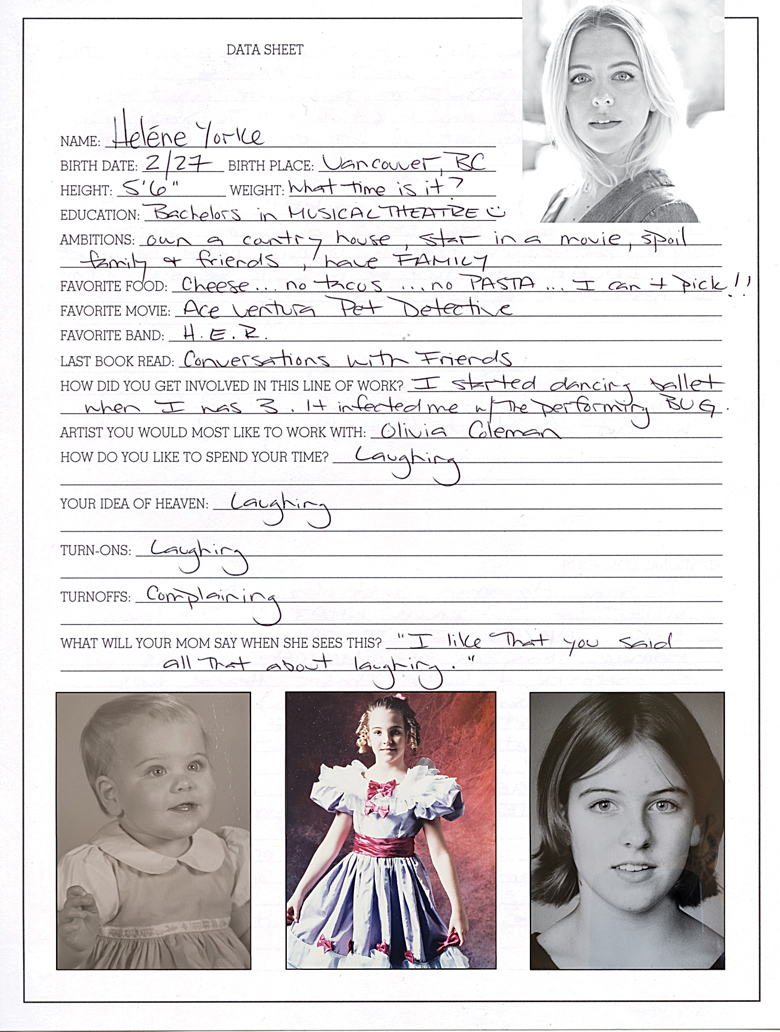 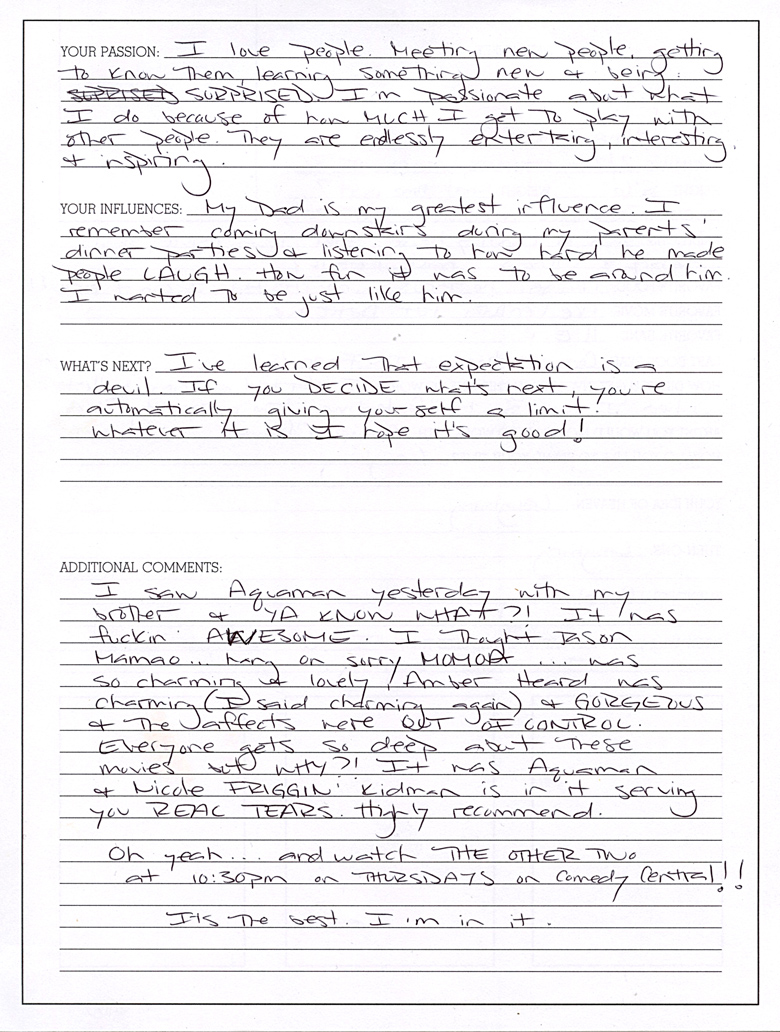 Where are you from?
I was born in Vancouver, Canada. I am from Los Angeles, California.

Ambitions:
To own a country house, star in a movie, spoil family and friends, have a family.

What have you been in?
I have been in everything from—I have done Bullets Over Broadway, I did American Psycho on Broadway. This feels like bragging. I’ve been on 30 Rock. I’ve been on A Gifted Man. I’ve done BoJack Horseman and Family Guy. I’ve done American Dad. I did Wicked on tour, and I did High School Musical on tour many years ago.

How do you feel about this career?
I feel really lucky. I like that I get to have fun and I get to meet new people all the time.

How would you describe your specialty or type?
I would describe my specialty as not quite all there, all together or totally with it.

Who is your favorite actor you look up to?
Oh gosh, I feel like it changes all of the time. Right now I can’t get enough of Glenn Close on Instagram, or Olivia Coleman or Diane Keaton. Stuff like that.

What would your ideal job be?
My ideal job… it’s so funny, my ideal job is the job that I have now, which is I play a regular character on a cool funny comedy show on a cable network. That was my mountaintop for a long time. I feel very proud that I am doing that.

Do you consider yourself to be lucky?
Yes.

What advantages do you have?
My biggest advantage is that I come from a very strong family and I have wonderful siblings and a lot of love standing with and beside me.

How do you feel about how interconnected the world is becoming?
I think it is amazing. We all know each other, we see so much and we are exposed to everything. It almost increases your choices of things you want to be, who you want to be, and where you want to go.

“I decided to become an actor because I don’t know how to do anything else.”
— Heléne Yorke

What challenges do you feel the world is facing today?
I think the challenges the world faces is being able to talk to one another. I think so many people disagree and so many people’s opinions are so deeply rooted so down deep inside of them that being able to see one another is almost impossible. I think it is causing a lot of stress and anxiety.